Leadership Skills Come from Many Places

Editor’s Note: Triad Strategies prides itself on its team approach. Because we are a flat organization, structured around our clients’ goals, we look for individuals who have acquired these soft skills because they lead to more robust teams and ultimately success for our clients.

During my tenure working with the Greater Lehigh Valley Chamber of Commerce, I was a part of many meetings discussing workforce initiatives and issues in the workforce regarding my generation. The age gap in most of those meetings between me and the next youngest person was around 20 years, and I always had the task to defend my generation. I actually agreed with a some of what was said – there was a lack of soft skills, a tendency to show up late, the inability to draft a professional email, expectations for time off rather than deserving time off… the list can go on and on. But I also knew that there are so many other people in their young 20’s that absolutely do not fit that description.

I believe that I was not a part of this stereotype for a few reasons. First and foremost, I was raised with a high level of values and morals by my parents. One of the other key influences was the time I spent as a fraternity member and President of Muhlenberg College’s Delta Tau Delta (DTD) Chapter. 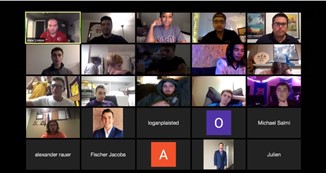 Being President forced me to face situations not all 20-year olds are faced with. It put me in meetings with executive leaders of Muhlenberg College, I had to set goals with my Vice President, Treasurer and other members, I had to be a face of an organization and represent not only myself, but represent my family, my fraternity and my college wherever I went. The challenges I faced proved to be an amazing catalyst as I was catapulted into the professional world.

It was a smooth transition because for the most part, I understood how powerful a team can be and the importance of clear communication, strategic goal setting and the ability to think outward about the success of an organization, rather than thinking inwardly about my own personal agenda. I did not realize the true power of being President until after I graduated.

Recently, I was able to share this insight with current members of Delta Tau Delta. During a video-conference call with about 35 undergraduates throughout the country, I was able to talk about how the experiences and lessons learned from the fraternity can be a priceless investment for years to come. We discussed the importance of soft-skills and how being the President or holding other high-ranking positions can sharpen those under-appreciated tools. We also discussed the importance of collaboration. Many presidents may think every burden falls on their shoulders. The key is to remember you have valuable resources through other members, through the college, through alumni and through the national fraternity.

Like Asa, I have realized the impact of leadership positions I had in college on my professional career. While studying Political Science at Dickinson College, I joined Delta Nu Sorority, played women’s basketball and was a member of the Student Athletic Advisory Council (SAAC).

I was a captain of the women’s basketball team for three years and that position came with challenges. My job, along with my co-captains, was to set an example for the rest of the team, on and off the court. I had to help bridge the gap between the coaching staff and the players, that occasionally made me an unpopular person. But I had a job to do and I took that job very seriously.

Playing an intercollegiate sport that spans two semesters does not make it easy to prepare for life after college. I did not have as many opportunities for internships, job shadowing, etc. But what I came to realize as I began my job search was that the skills, I possessed from that experience would help drive my professional career.

Last week, I was able to share these thoughts with 30 student athletes at Dickinson through Friends of Red Devil Basketball, a newly established alumni network that connects basketball alums to student athletes for the purpose of mentoring, networking and career development. Members of the men’s and women’s basketball team, who are on hiatus due to the pandemic, are identifying ways to utilize this time to sharpen their professional skills to make themselves more marketable to hiring managers. 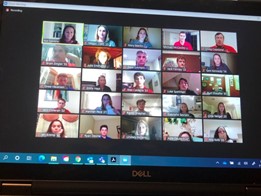 I explained to them that my first hiring manager took a chance on me because I played a team sport and because I held leadership positions during college. He knew that I had time management skills, the ability to work toward a common goal and success in collaboration.

These soft skills, as Asa described, are as important if not more than hard skills and experience. Hiring managers and supervisors can teach new hires the basics of their craft, but the soft skills are much more difficult to cultivate.

Asa noted the focus Triad has on our 30 Fundamentals, The Triad Way. These behaviors, while I believe we each already embody them, still need nurtured. They remind us of the expectations we set for Team Triad, our clients, and ourselves.