President Joe Biden this week held a two-hour news conference in an attempt to re-set his agenda for 2022. Fresh after being “Sinemanchin-ed” on his voting rights plan and having his vaccine mandate nullified by the SCOTUS, Biden desperately needs to unplug his administration and plug it back in.

The nation’s unemployment claims ticked up last month, with 286,000 Americans filing first-time claims.  With inflation at levels not seen since Ronald Reagan was at 1600 Pennsylvania Avenue, the absolute LAST thing Biden needs is an unemployment crisis. You know the old saying, “when it rains, you get absolutely axe-murdered in the midterms.” Or something along those lines.

After reading the preceding paragraph, one might find it completely counterintuitive that Pennsylvania is struggling mightily with workforce development. Employers all across the state are having a devil of a time finding employees. That said, Triad is hiring! Yes, even the Best Public Affairs Firm in All the Land is not immune to the vicissitudes of the labor market. Fifty-cent word alert, which thanks to Joe Biden now costs eighty-five cents.

Federal infrastructure loot has begun to matriculate into the states, with bridge repair funding leading the way. Pennsylvania is in line for a cool $1.6 billion, which seems like a lot until you realize how many damned bridges we have around here. Been to Pittsburgh lately? There is a bridge every 10 feet.

There is also quite a bit of inland waterway cash flowing into the state (see what we did there?), and this week it was announced that the Montgomery Lock and Dam in Beaver County will get an $800 million facelift. If you are from Beaver, you know a thing or two about dams, AMIRITE??

Gov. Tom Wolf this week made his way to western PA as part of what the press has deemed his farewell tour. Wolf touted the fact that during his tenure, Pennsylvania went from flat broke to flush with cash.  This, of course, prompted lawmakers to scream a collective, “You’re welcome!” Easy, people. We are all aware of the three branches of government and how they work. Success, in this case, has 254 mothers.

Last year, the state instituted a nursing student loan forgiveness program and allotted $5 million to that effort. Well, it looks like y’all are gonna need a bigger boat. More than 4,800 nurses have applied for that funding and if you are as good at math as we are, you’ll find that cake don’t bake.

It was a record year for the state’s casino industry, we learned this week. So naturally, now would be a great time to try and destroy the industry by putting slot machines in every bar and convenience store in Pennsylvania! Once again, we will remind everyone that the state is the controlling shareholder in the casino industry, due to the 54% tax rate (yeah, you read that correctly.) Put down the damned scissors, people, your nose looks fine the way it is.

Also, in related casino news, there will be a brand-spanking new one built in Shippensburg this year! It is truly a wonderous time to be alive.

The new state legislative maps are coming down the home stretch, as the commission in charge of drawing said maps begins sifting through 6,000 public comments. The challenge will be to remove the bot-generated online comments from the real ones. For instance, comments like “My district good and fine and don’t make unfairer” are probably not legit.

Things are not quite as smooth when it comes to the new congressional maps, as lawmakers continue to fight like cats in a burlap sack, bumping up against the deadline. For all the hooting and hollering and accusations of partisan gerrymandering, we have a prediction. When the maps are done, the partisan split will yield a 9-8 advantage for one party, which, given the state’s purple leanings, is probably fair.

A group of lawmakers is trying to privatize Pennsylvania’s liquor stores for the 6,843rd time in the past 20 years. Crazy, huh? Next thing you know, some lawmaker is gonna propose eliminating property taxes! In other news…

If you are a Pennsylvanian (and who amongst us is not?), you’d have to drive to the Rocky Mountains to find more expensive gas. That’s right, babies. Number one with a bullet. You would also have to drive through some seriously boring states to get to the Rockies, we recently discovered.

Seventy-five percent of Pennsylvania’s adult population is now fully vaccinated, which is above the national average. We are not sure if this is a tribute to the work of Governor Wolf’s bipartisan vaccine task force or if Omicron scared the absolute dog crap out of everyone. Either way, good on ya, PA!

Speaking of the ‘Cron, case numbers are going down across the state, which gives us hope that maybe, just maybe, the summer of 2022 will look more like the summer of 2019, which is second to only the Summer of ’69 (cue Bryan Adams music.)

If you get bored this weekend watching the state freeze, consider heading down to your local blood bank and sharing a pint. The state is facing a shortage, and you don’t need to be hoarding all that blood anyway, Mr. Greedypants.

Former House Speaker Mike Turzai is NOT running for governor, less than six days after it was reported that he was running, meaning we will only get to choose from the mere 73 GOP candidates remaining. 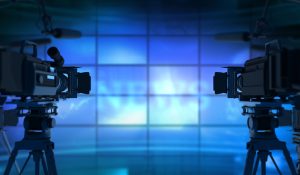 In our We Can’t Make This Up segment this week, we had a tough choice. There were many worthy Team Triad submissions (we will get to the snakes next week) but Ms. Tori Yorgey won the prize by continuing her TV news live shot after being hit by a car. The PSU grad and Philly native did what any Philly native would do in that situation. She shrugged it off, finished her live shot, and then beat the s#$t out of the car. By the way, Yorgey is on her way to joining the WTAE news team in Pittsburgh! Congrats to her!

And that’s what passes for news around here this week! Stay warm, have a terrific weekend, watch out for vehicles skidding on the ice, and we’ll see you back here next week!