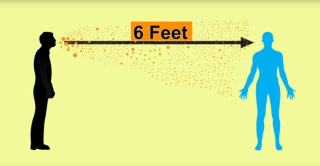 We begin this week’s festivities with a bit of history, in the hope of creating some context for what we’re facing right now. “Black Death,” aka “the Great Bubonic Plague,” aka “the Great Plague,” or simply, “the Plague” is estimated to have killed between 75 million and 200 million people in Eurasia between 1346 and 1353, wiping out 30% to 60% of Europe’s population. It took 200 years to repopulate.

Not to minimize the coronavirus disease – it’s serious – but among pandemics, the Plague was really badass – probably (we hope) lots more so than COVID-19 is shaping up to be. Nevertheless, the country has been thrown into a panic over handwashing, face-touching, forearm-bumping, school closings, canceled sporting events, self-quarantines, testing kits, working from home and this new thing known as “social distancing.” We seem to be perilously close to being confined to our homes with nothing good to watch on TV (aka “sporting events”).

Oh, and that strong, stifling stink? That’s the global economy.

In Washington, President Trump floated the idea of reducing the payroll tax through the end of the year as one way of helping people get through the pandemic. Also mentioned were extending the tax-filing deadline, reimbursing companies for sick leave and providing aid to the travel industry. It wasn’t immediately clear whether any of these ideas will gain traction.

In Pennsylvania, the COVID-19 tally was up to nearly 30 presumptive positive cases by week’s end, more than half of which were in Montgomery County. Governor Wolf and Health Secretary Rachel Levine have conducted daily updates to keep the public apprised and, at least so far, haven’t honked off any foreign governments or rankled any stock exchanges.

Then there’s the whole grocery shopping panic. Many people are asking, “Why the sudden run on toilet paper, when other staples such as milk and bread remain on the grocery shelves?” To which we respond, have you ever tried using milk or bread to… oh, never mind.

By the end of the week, Anthony Fauci, head of the infectious diseases division at the National Institutes of Health, said the country was just a few days away from finally having the ability to widely distribute testing kits, and in the meantime, WASH YOUR HANDS!

To help customers affected by the pandemic, PECO has suspended service disconnections and waived new late payment charges through at least May 1, 2020. In addition, PECO will continue to remind customers of existing bill assistance resources and energy assistance programs to support them through temporary or extended financial hardship.

Two former Democratic presidential candidates, U.S. Sens. Kamala Harris and Corey Booker, threw their support to former U.S. Sen. and former Vice President Joe Biden on the eve of another multi-state primary, which the week before became a two-person race. Wait! What?? Tulsi Gabbard is still in it???

Consequently, Biden had another good Tuesday, winning primaries by significant margins in Michigan, Missouri, Mississippi and Idaho. Bernie Sanders claimed North Dakota and eight delegates, and Washington was still too close to call by the end of the week. It’s not looking good for “Feel the Bern” as Biden has suddenly significantly increased his delegate lead, and many Dems are calling for Sanders to stop the sniping and allow the party to unite.

Assuming that either Trump, Biden or Sanders is elected in November, we will behold the oldest president ever elected. Trump, who was first elected at age 70, is the current record holder, and would be four years older. Sanders would be 78, and Biden 77.

Last week, PennDOT said it was not overly concerned that Real ID driver licenses aren’t exactly selling like hotcakes. This week, Allegheny County Airport Authority officials piped up, saying “well, we ARE overly concerned about that, on account of the prospect of people without Real IDs showing up and expecting to fly, only to be turned away because they didn’t bring a passport.” It ain’t easy being an airport. As of Oct. 1, anyone without Real ID will need a passport to fly or enter certain federal facilities.

The National Socialist Movement has been granted a permit to hold a rally in Williamsport next month. Anticipating that some residents will not be pleased that this self-described white civil rights organization (and assuming the event will go on as planned), Mayor Derek Slaughter is asking residents “to denounce this hateful rally” by attending a city-sponsored “Dare to be Different” event instead. Good move, Mr. Mayor.

Our We Can’t Make This Up feature this week takes us, once again, to the internet. Are you seeking advice on how to avoid being infected by COVID-19? Online dating app Tinder would be more than happy to help. Among the app’s tips: frequent handwashing, carrying hand sanitizer, don’t touch your face (or presumably anyone else’s) and of course, social distancing.

And that’s what passes for news around here this week, friends! We’d like you to know that before typing this missive, we scrubbed our hands, Lysoled the keyboard and donned latex gloves. Have a great weekend (while keeping appropriate social distance) and we’ll either be back again next week or self-quarantined and working from home!